Is a Kai Ken right for you? 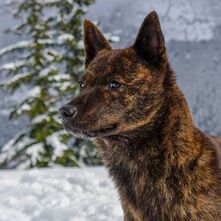 Tavi the Kai Ken
​    Why Kai Ken? This question is asked often, I asked it once too.
It is hard to know what exactly you're getting into when you're thinking about getting a    Kai Ken. They are so scarce and spread out over the United States that it might be hard    to find one to meet prior to signing up to getting one. I had never met a Kai Ken before    I got Tavi, and I will admit I was pleasantly surprised. 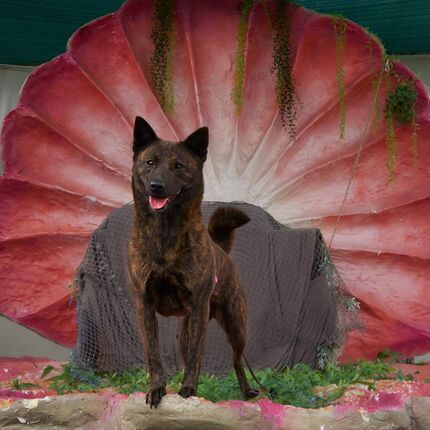 You will hear frequently that Kai Ken are not like other dogs-- while this is true that they do not possess the same social butterfly tendencies as a retriever, nor the focus and bidability of a herding dog, it is important to remember that they are dogs and capable of similar goals other breeds may hold. When it is said that Kai Ken are not like other dogs it is often in reference to the difficulty trainers have training Kai Ken.
​
Kai Ken ARE hunting dogs, which means they are very capable of listening and taking direction from their owners. Whether they do or not is dependent on the bond with your dog. 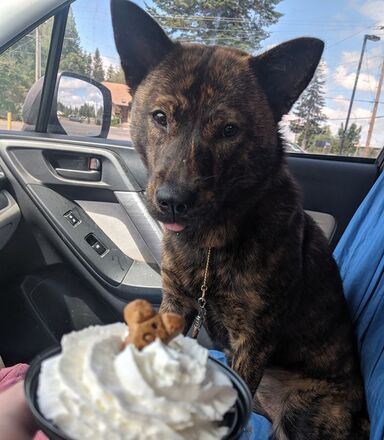 Kurisu is very motivated by puppiccinos!
​       Often when Kai Ken are called stubborn, independent, etc. it is because they're not being properly motivated. Kai Ken and all Japanese dogs are very intelligent, so intelligent that they know that listening to you saying 'come' is not going to be more interesting than sniffing the mailbox that 20 dogs have peed on since yesterday. This doesn't make them stubborn, this means they know the worth of their time and efforts and the owner isn't properly motivating their dog. Some owners have it easier in the sense that their dogs are very food driven and their dog will do anything for food. Others may require you to motivate them with their prey drive by pulling out a rabbit toy and playing with them, some may want some genuine praise for their efforts.
​
​      The last thing you should ever do though is take the easy way out of saying they're stubborn-- at that point you're saying their behavior is "who they are" instead of taking the initiative to learn your dog better. If the owner knows "who they [the dog] are" then the owner should know that dog's most favorite thing in the world and I doubt it is blowing off/ignoring their owner.
Working with dogs, especially Kai Ken, is all about communication. Kai Ken excel when they're partnered with people who want to communicate with their dogs. It is a lot more effort than just having a pet, but when you have a dog whom you can truly count on, who is predictable in every way because you know them so well, it is very rewarding. These are the dogs that you give them a mile and they'll be right there with you every step of the way.

All About Kai Ken

How are Kai Ken with other dogs?

​How are Kai Ken off leash?

How much exercise do Kai Ken need?

How much does a Kai Ken puppy cost?

What are the grooming requirements for Kai Ken?

BRIEF HISTORICAL SUMMARY: The Kai Ken originates from medium-sized village dogs that existed in Japan dating back to ancient times. It became established as a breed in the Kai district (Yamanashi Prefecture), which is surrounded by mountains. Another name for this breed is 'Kai tora-ken' or 'Kai Inu'. A distinguishing feature in this dog is its brindled coat. These dogs are used mainly for hunting wild boar and deer. Their strong inclination to form a pack is thought to contribute towards maintaining the purity of the breed. The breed was designated as a natural monument of Japan in 1934.

AKC Standard:
The current AKC standard for Kai Ken is based on the FCI standard.